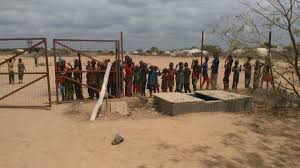 Trudge. To walk slowly or with heavy steps.

She glanced down at the downy head that came just to her chin, the black curls soft on her cheek. The child was strapped to her, his warm body the constant reminder of why she did what she did. For him.

She looked back up to the chain link fence that surrounded them, the compound bustling with activity. Children squealed and ran haphazardly through the tents while mothers scolded and fathers clumped together in circles, worried eyes scanning the horizon. She would have given the world twice over for her husband to be at her side. As she thought of him, her throat closed up. Tears threatened to escape their confines. Then the baby giggled and reached his chubby hands for her cheek. She caught his wandering fingers in her own and kissed them. She still had a reason to live. To fight. To…trudge. Even if that was all she could do, she would.

The line shifted, and she took a step forward. The woman in front of her smelled like dust and sweat, the once-colorful shawl around her shoulders now stained with dirt and grime. What was her story? Perhaps not much different than her own. Did she feel the same hope burning in her chest that this time, she would be given access to the world beyond the fence? She must, to some extent, otherwise she wouldn’t be back in line. Waiting for hours. Even days.

Another shift. Another step forward. The child reached for her again, and she kissed his curls. He squirmed and fussed, trying to escape. She knew the feeling. No human being was meant to live in confinement. Freedom and liberty was a God-given right. Yet here she was, wasn’t she? Confinement for freedom. There was irony there somewhere, but she had no desire to find any humor in it. Stale irony, then.

Another shuffle forward. The future at the end of the line taunted. Was it bright and beckoning? Would she find their freedom? She didn’t know what she would do if failure met her there, instead. Anxiety clawed at her chest, even as the baby hugged her tight and babbled incoherently. What a stark contrast he was to her own inner desperation. She would be strong. For him. She must be.

Her turn had come. Another shuffle, and then…”Name?” She gave it. “Papers?” She gave them. The eyes that looked up at her had no compassion. They were dead eyes. They belonged to a wax figure in a museum.

The refugee crisis continues. 24 displaced people flee for safety every minute. Yes, you read that right. To get involved, go here.