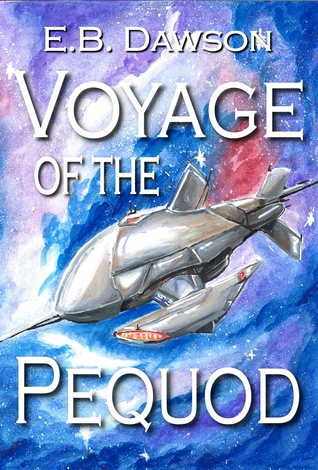 This short story delivers in typical Dawson fashion. I’m not usually fan of retellings, but the author manages to capture the essence of the original with new ideas and a fresh take that is both respectful of the older version yet adds a newness that is refreshing.

Similar to Moby Dick, there is a crew of sailor-talking men who have a sort of awe-inspiring view of Captain Ahab, and his obsession with a ship/alien/other entity (one thing I wish had been more clear) that supposedly rammed into him in space and made him lose his leg. This entity reminded me of a cross between Battlestar Galactica’s cylons (and even one of the characters in this story is called Starbuck. And I’m not even mad about it) and the ship from Alien.

I enjoyed the characters, Starbuck especially, and his loyalty to Ahab that doesn’t keep him from speaking up when he thinks Ahab is wrong. The Metal Worshipers were definitely interesting, and gave me a bigger picture of the world this story is set in. Like most short stories, worldbuilding and character development are very difficult, but I thought Dawson made a good crack at it.

My main complaint with the story was the distant narrative voice that *very nearly* head hopped. But it WAS reminiscent of the classics. Since this story was a retelling set in the far future, I thought maybe a closer POV could have been used, but that’s just personal preference. All in all, I’m definitely looking forward to the promised follow-up!